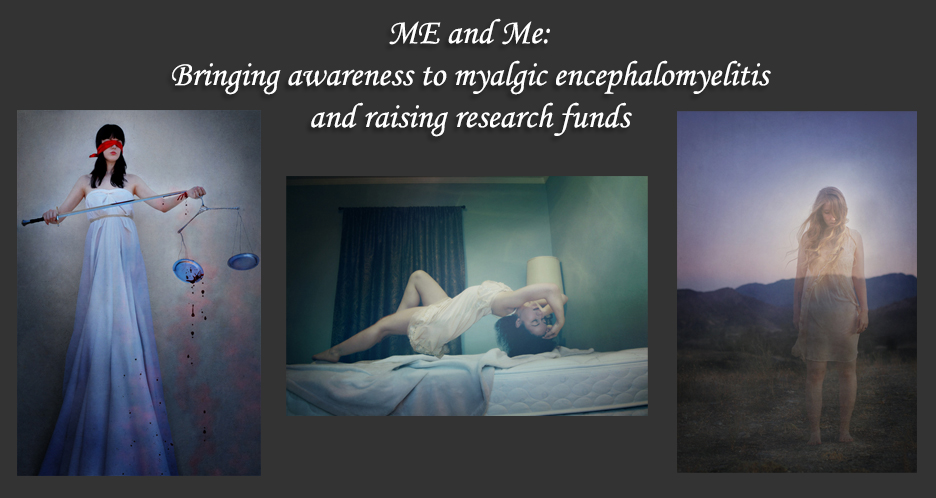 I have been living with myalgic encephalomyelitis (ME) for the last decade.

In the United States, we call ME by a whole host of other names; Chronic Fatigue Syndrome (CFS), fibromyalgia (fibro), chronic fatigue immune dysfunction syndrome (CFIDS), post-viral fatigue syndrome (PVFS), Chronic Epstein-Barr virus (CEBV) and, most insultingly, the "yuppie flu." Luckily we seem to have mostly left the "yuppie flu" label behind us, but many of the other names are not much better. Calling it Chronic Fatigue Syndrome has been likened to calling tuberculosis "Chronic Coughing Syndrome" or stomach cancer "Chronic Upset Tummy." The names are not indicative of what's really happening in our bodies. They are trivializing and patronizing.

I prefer ME, which is what most of the world calls it. It literally means "inflammation of the brain and spinal cord with muscle pain." This at least hints more accurately at what may be going on. Muscle pain is one of the defining characteristics of reaching that diagnosis and the evidence is suggesting more and more that this is ultimately a neurological condition. ME at least doesn't carry the negative connotations of the other names; people are generally under the assumption that they are not "real" diseases.

Let me state that there is still a tremendous amount of controversy over what name to give us, and if they really are all more or less the same disease. I do believe they are the same disease from everything I’ve seen and read, but there will be those who do not agree with me. However, since the entire reason the US broke off from the rest of the world’s name in the 1980s was to create an insurance loophole so companies could deny coverage to patients… I am reluctant to believe what anyone on that side of the table claims.

So I call it ME, though since it is a lesser-known name here in the United States: I’ll often consent to referring to it as ME/CFS. Meeting the names halfway, so to speak.

ME is an illness which is not well understood, either by the medical community or by the population at large. It is characterized by a persistent, crushing, flu-like fatigue which rest does not alleviate, along with muscle pain, joint pain, insomnia, headaches, migraines, post-exertion malaise (which is disproportionate to the amount of energy expended), chronic pain and "brain fog" which gets worse the more tired you become.

ME is a very real, very physical and very devastating illness. It robs you of your life, little by little, or in large chunks and there is currently no real hope of ever being able to get back what it takes.

I have undergone more tests and procedures than I care to remember. I have tried every food and supplement imaginable; every Western and alternative approach. Occasionally, I find something that helps even fractionally and I cling to it like a drowning girl.

My life has become smaller and quieter each year in response to the unreasonable demands of my body, only to have it ask for even more. To a degree, it’s generally agreed that staying as active as possible is best; that “if you don’t use it, you lose it.” This is tempered with one of the few things known with absolute certainty about ME: if you continually push yourself past what you can handle, you WILL get worse. And it can get much, much worse than what I experience.

The United Kingdom documentary Voices From The Shadows paints an uncomfortably vivid picture of how bad ME can really get, for any who doubt. It shows people completely bed-bound, in constant, wracking pain, despite morphine drips, eyes continually covered as they are unable to endure even sunlight filtered through curtains. Ears always protected with earplugs because they are so sensitive to sound. From my end of things, going to the grocery store is only barely tolerable. All the light and noise, oh the cacophony of noise… people talking, carts wheeling, plastic crinkling, children crying, music playing, announcements made… I genuinely dread the necessary trip each week. And if I feel that way about it when my case of ME is one of the mildest diagnosable forms, I can hardly imagine the miserable existence the poor souls with severe ME endure.

I don’t want to have to know what severe ME feels like first-hand. So I keep trying treatments and supplements. I modify my bedtime, my sleep habits and try to rest as much as possible, without giving up any of the physical ability I still have. I try to do gentle yoga and do more walking, which I can also use as time to scout locations. I take fistfulls of supplements and medications. My family and friends all know that any plans made are subject to the whims of my body and I may have to cancel at the last minute. Very, very thankfully, they have all been extremely understanding and supportive. It’s a hard enough battle to fight your body every day; I am sorry for those who also have to fight with their loved ones too.

People not understanding is at the core of our problems. The medical community that doesn’t understand what our disease is or how to help us. The public, which have been led to believe our disease is not valid. And we ourselves who are trapped in these confusing, maddening bodies that seem to be actively working against us.

Luckily, I do believe the tide is finally starting to turn. More and more noise is being made about ME and we are starting to get even a little bit of recognition and validation. More research is being dedicated to finding out what’s really going on in our bodies. I try to maintain a balance between being open to changes coming and breakthroughs being made without actually hoping for them. The disappointment is too great when they don’t pan out.

Through it all, the highs and lows, the dinners I can attend and the ones I have to stay home from, the times I weep from pain and frustration and the days I walk easily through meadows, I have my art. I’m sure you’ve all heard me talk about my Enchanted Sleep series and how I use my photos to portray what living with ME is like. Art has helped me keep my sanity through these last five years. It’s something I can do, not just in a metaphoric sense and raising awareness, but it’s physically something I can do. Walking through the woods scouting locations is good for me, body and soul. I can still edit even when I need to lay down (which is frequent) since I work on a laptop. Sometimes muscle or tendon pain in my right arm or wrist will force me to stop for a few days or weeks, and those are always agitating times. I want to be creating. That is where my soul finds meaning and pleasure.

It’s been a rough road. But it’s also brought some incomparable joys to my life; my discovery of photography, for example. And most importantly my husband Geoff. He stuck by me when I became very ill after we’d only known each other for two months, and been dating one month. Lesser men would have run. He has supported and loved me every step on this tricky road and is always there in the dark moments when I want to give up. He gently pulls me up and sets my feet going again. I am so incredibly grateful for him.

More research is finally being done in the UK. Hopefully, the results of those studies will trickle down to the US sooner rather than later. I am choosing to hold out hope for remission… but it’s also okay for me to feel sad. It’s okay for me to mourn the things I have lost. It’s ok for me to have bad days when I just cry and burrow under the covers all day. It’s okay to be human and have emotions.

I work hard at my art, not only because it’s so deeply satisfying, but because it’s something I hope to make a career out of. Means of employment get fewer and fewer for me every year, but I can do art. It’s a way for me to earn money and contribute to my family’s income, things very important to my sense of identity.

Each journey through ME is different. This is just my story. I can only hope that by telling it, it adds another drop to the sea of change coming and will bring us a tiny bit closer to recognition and a cure.

Canary In A Coal Mine


An ambitious and brave documentary currently in production about ME/CFS. I was fortunate enough to be a part of their Kickstarter campaign and I eagerly await the film’s release!

You can view a preview of their film below and visit their site to get involved!

If you would like to help this tide turn faster, I can point you in a couple of directions. The Microbe Discovery Project is, in my opinion, the best US ME/CFS group. They're crowd-funded and they actively research treatments and cures. The Hummingbird Foundation is not only an invaluable trove of information for those with ME and their caregivers but, despite the site's founder having severe ME herself, strives to eliminate the inequality in our treatment and achieve recognition for our illness. Lastly, the Nightingale Foundation was started by Dr. Byron Hyde, perhaps ME's biggest and loudest champion, with funds going to research. No gift is too small. I deeply thank any of you who are able to help our cause!

The Microbe Discovery Project asked its members to make a short videos describing how ME has effected my life so here is mine: